I love Orly polishes, their formula is great and you get a big .6 fl oz bottle!

This is Orly Glam, this was my first Orly polish and one of my favorites! 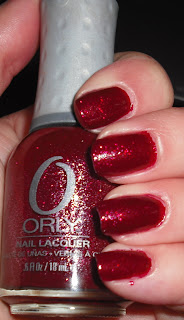 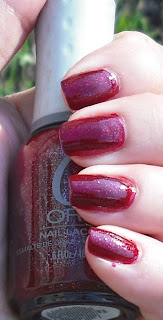 Orly Glam is a deep red jelly base with gold and red glitter mixed in. This isn't a dupe for China Glaze Ruby Pumps. Glam has less glitter and is darker.

I picked Glam today in honor of Rue McClanahan. If you do not know who Rue McClanahan is she was best known for playing the saucy and sexy Southern Belle, Blanche Devereaux on the show Golden Girls which aired from 1985-1992. She passed away today from a stroke.

She was an outstanding actress and comedian. I read her autobiography a few years ago and she and the character Blanche were definitely not far off. She worked hard and sacrificed a lot to get into acting. I felt Orly Glam was a perfect nail polish to showcase today because it definitely suits Rue. Golden Girls is my all time favorite show. I have all the seasons on DVD and it is a nightly ritual of mine to watch an episode even though I've probably seen each of them at least 10 times. That show had some of the best writing and acting (Betty White, Estelle Getty, Bea Arthur, & Rue McClanahan) of all time. This show has always been able to put a smile on my face even on the gloomiest of days. Rue McClanahan will be missed by me and many others. She has definitely has left a mark on this world!

I'll leave you off with one of my favorite Blanche Devereaux scenes from Golden Girls.


Thank you for being a friend!

Posted by Stephanie Merlin at 12:06 PM