Late last year Milani released a bunch of  "One Coat Glitters" and "Jewel FX" polishes. In addition to the colors released, they released a silver "Jewel FX", but as far as I know I've only seen it online. I prefer to not shop for Milani online. I find I can get them cheapest at CVS, especially when you have the addition of CVS deals and Extra Care Bucks. Milani Silver wasn't going to happen at CVS (or any other brick & mortar store that I know of), but I did find a good Jordana alternative at KMart.

Silver Jewel over China Glaze Cheers to You 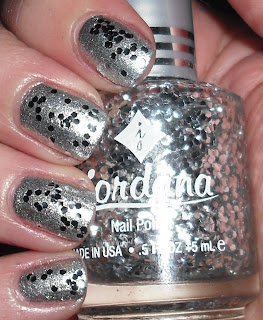 Silver Jewel is large silver hexagonal glitter suspended in a clear base.

I get the impression that this maybe less dense than Milani Silver, but this is definitely build-able. I really love this over a silver polish. I think it gives you awesome looking disco ball nails!

Posted by Stephanie Merlin at 12:50 PM