Huemorista Nail Lacquers are polishes that are mixed and sold on by Jayna Ferris on Etsy. I had heard about her polish through other bloggers, so I started "liking" her page on Facebook. She ended up doing a giveaway after she received 100 likes on Facebook page for a customized set of 3 of her polishes. My name was the one that was drawn, as the winner and I was so excited! She had 5 collections of 3 polishes each, and now she has 6. It was definitely hard to pick 3 polishes because these polishes are so unique and fun! I ended up choosing the following. 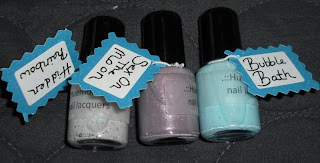 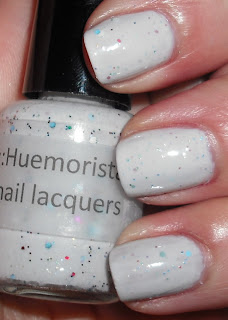 As described on her website, "Very light gray with multi-colored glitter particles and more medium-sized round glitters as well"

This one is so cute! I think this maybe the answer to the people who didn't care for Deborah Lippman Glitter in the Air. This isn't sheer at all, and it's full of fun glitter. This color reminds me of those cute cupcakes with the confetti icing!


Sex on the Moon 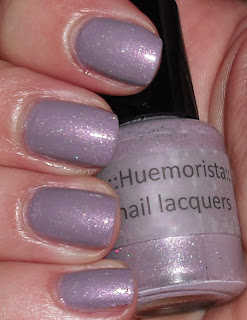 As described on her website, "Dusty purple based gray with a fuchsia flash and opalescent flakies"

I think my favorite thing about this polish is the color itself. I love the dusty kind of lavender shade, and that pink shimmer is icing on the cake. I love the name too, though I think having sex on the moon would be rather difficult. 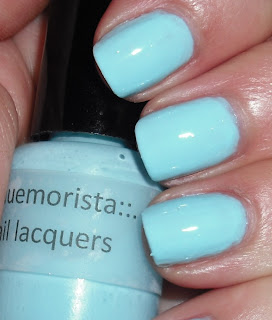 As described on her website, "Aquatic blue jelly with opalescent flakies and tiny aqua glitter particles"

I really love this shade of blue. I'm just a tad bummed out about this one though. I could see the pretty flakies in my bottle, but they were not as visible on my nail. I may need to shake the bottle up more next time.

Overall, I really liked these polishes. These are smaller bottles, but you do get a unique color that is made by someone who really loves polish. I like how with people who are into polish they take into account things nail polish people love...glitter, flakies, & etc! Each collection of 3 polishes is $12, or your can customize your own for $12. By the way, Jayna said she'd be doing another giveaway when she has 200 likes on your Facebook page!

Thank you so much Jayna for these polishes and having that giveaway! :)


P.S. I'm in the process of transitioning to a new commenting system, so if things are a bit wonky they'll be smoothed out soon!

Posted by Stephanie Merlin at 12:20 PM