I have to say the flea markets in Florida are interesting places. They sell a wide-variety of things many of which you have no use for or look to be something that was popular around 1985. My trip the flea market yesterday was unsuccessful. There is one vendor there who sells China Glaze, but for $5 a bottle. I can get China Glaze for $3 a bottle on e-tailers, so it doesn't seem worth it to me. Plus, the booth is so small the lady who owns it gets in your personal space and hounds you about it until you cave in a buy something. It's a rather uncomfortable situation.

Anyways a few months ago I did find a pretty polish in one of the "dollar stores" at the flea market filled with foreign items. This polish was only a dollar and it was in a box full of other no-name polishes. Many of the ones in there were pretty ugly colors or dried up, but there were a few pretty ones. The reason I post this is because Body and Soul posted about the same brand of no-name polish the other day.

This is a red foil-like shimmer. It is truly a beautiful and unique red. That's not always easy to say. It actually reminds a lot of some the reds coming out in upcoming fall collections.

However, there is a problem with this. Let me first say I've never been overly concerned with what is in my nail polish. It is probably because all my polishes are brands I'm familiar with are well known. I'm not someone who only will use "Big 3 Free" or vegan polishes etc. This polish....well it concerns me.

The smell of the polish is absolutely horrible. I've smelled some bad polishes, but this one is worryingly bad. You know the smell of pencil lead (well I know it's not really lead in pencils now it's carbon)? It smells like they took a bunch of lead from mechanical pencils crushed it up and put in this polish. You don't even need to take the cap off, just untwist it and smell permeates a room. All I can say is coming from someone who is pretty laid back with nail polish, this bothered me. Do I think it will kill someone? No. Do I think you'll be rushed  to the ER after using it? No. I do think whatever is it in it cannot be good to breathe in! The smells goes away after it dries, but still the initial smell is enough to make me think twice about using it again. It's a shame it's a pretty color, but I even have some boundaries. I'd rather pay $23 for Paradoxal than have to smell this again. :P

On another note I'd figure I'd share with you some of the very unusual and disturbing items at the flea market... 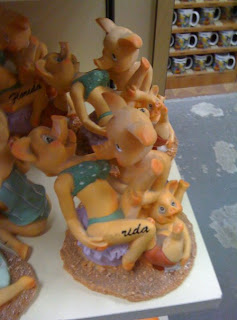 We have some pigs engaged in some strange antics with a baby piglet watching......I have NO IDEA. Don't ask. 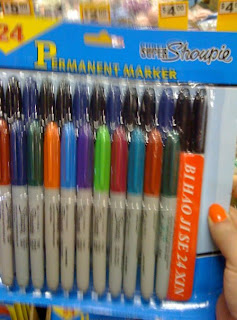 We have some Shoupies not to be confused with "Sharpies"! 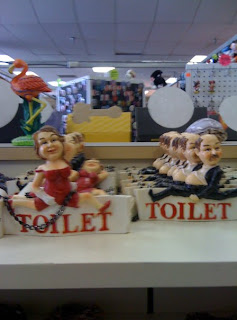 Again. I have no idea. I don't even want to know either. That's the flea market for you!

Do you have any brands or types of nail polishes you won't use because of the ingredients or smell?