Many of you thought it would be a good idea for me to do a red glitter comparison. I had a difficult time trying to figure out how to do this right. I probably have 20 red glittery polishes, so I just narrowed it down to the holiday looking jelly-glitter reds.

Here are the culprits.... 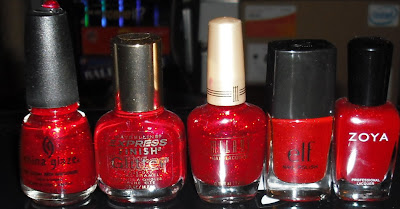 I used 3 coats of each of these to do this comparison. (It would probably be best to enlarge this photo) 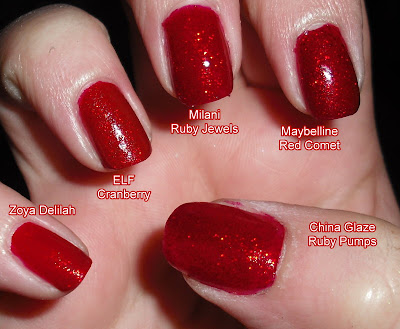 I think Ruby Pumps is better than my swatch here. I was rushing and camera angle dulled it it out.

-ELF Cranberry is different from the rest of these. This is the Cranberry version in the Target gift set. This one has more of a creme-like base rather than a jelly. It's equally as glittery as the other but has a different finish. Also this red is slightly more warm-toned than the rest.

-Zoya Delilah is the opposite of ELF Cranberry. This has more of a jelly-base with less glitter than the Maybeline,Milani, and China Glaze.

I think all of these are great, but when it comes to the 3 that are practically the same I don't know the difference. I think if you weren't do a swatch fest and rushing like me. Bad Steph, I know. All of these except Zoya Delilah and China Glaze Ruby Pumps would only need two coats. Zoya and China Glaze would be better off with 3..or 4 if you're impatient like me! :P