What does a glass of wine, a spunky Southern geeky blogger, and Harry Potter have in common?

Only a monumental glitter addiction that could get a whole hour episode on Intervention (you know it's bad when they set aside the whole hour to one hopeless addict).

Any-hoo, I was starting my glitter addiction very slowly. A few dollar store polishes, cuz I would never spend more than $1 on a bottle of polish. Isn't that how most addictions start????

My opinion of Snape starts as most others, pure disgust, yet I was still intrigued. We all have had "that teacher" who had biased opinions of us based on relationships with our parents. So was Snape and Harry's relationship. As we get closer to the end of the Potter saga, I could not help but cheat and read the ending online. So, there I was waiting for that moment when Snape revealed his memories to Harry. That moment seeing Snape stand outside the house knowing what was inside was almost too much to bear. My heart broke a million zillion pieces in that one scene. Snape on the floor holding Lily's lifeless body...chills.

I knew that any polish based on Snape would be dark and complex, yet had the potential to be visually stunning. That's when I happened upon this blog post by the awesomely sassy Mishka over at Accio Lacquer.

While this polish was not actually based on the character Snape, it was based on Sir Alan Rickman who just so happens to be Snape in the Potter movies. In my eyes, this man can do no wrong and his portrayal of Snape is nothing short of magical. Once I saw this polish, I knew I must own it.

This began my CrowsToes obsession. I have been on a mission to collect all the chunky style CrowsToes glitters. I have gotten pretty close to completing my mission. If glitter was the mob, Lauri would be the Godmama. 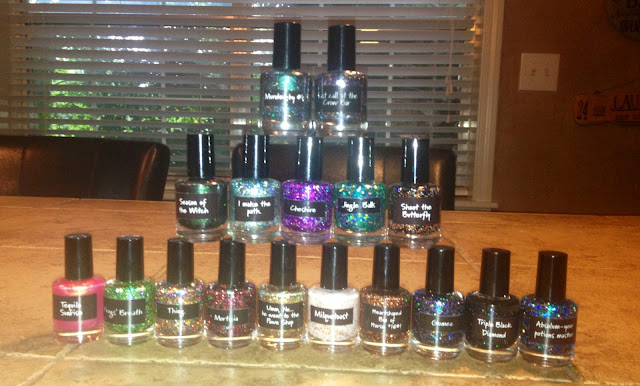 (It's not an obsession, it's a pyramid of magic!)

So it would happen that I spent so much on nail polish that I put myself on a "no buy ban." Don't cry for me reader, I cried enough tears over my "no buy bans." Stupid bills!

One night I was relaxing with a glass of wine, which let me say reader is a very rare occurrence. Once you take into account that I have been pregnant for the past two years, or busy working, or busy raising two babies, or trying to squeeze in a few hours sleep, all the while trying to stay sane, a glass of wine is a VERY rare indulgence. So, there I was enjoying my glass of wine, which turned to two glasses, which turned into three glasses, which turned into me waking up the next day wondering how I got in the bed. Hmmmmm.....how did I get in the bed???

When I rolled over the next day to check the time on my phone, I just so happen to check my email. This is not unusual. I check my email every morning. What WAS unusual was the fact I had an order confirmation from Llarowe.com for ALL THE CROWSTOES ON MY WISHLIST. Every last one of them!!! For $13 bucks a pop, you can see my shock! We all know alcohol releases one's inhibitions. Some people think they are bulletproof, I apparently think I am Donald Trump wealthy!

I was very surprised, but what I found in my email "sent" folder surprised me even more! There it was. An email to Lauri, the creator of CrowsToes. I really did not want to open it. I was afraid I would sound like a blubbering idiot! However, I had to know what humiliation I was putting myself through. It was not "that" bad.

It went like this,
"Hi,
I just wanted you to know that your polish gets more compliments than any other polish I wear period! I get so many people telling me how beautiful my nails are. Your polish is amazing! I appreciate you are an artist by trade, and you can tell in your polish. Sigh, I wish I had more money, because I have a huge wishlist at Llarowe!
The dude at the Subway window even told me that I had the prettiest nail polish he has ever seen. Not bad since he sees nothing but arms all day long ;)
A new obsessed fan,
Alicia"

I patiently waited for Lauri's response, and boy was I relieved when she thought it was funny! She was such a good sport! Wicked sense of humor that one has! 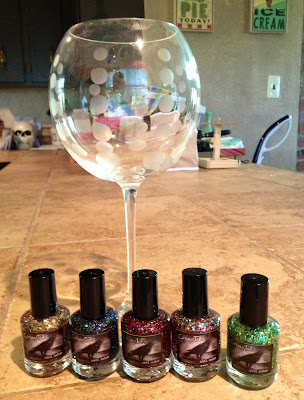 So in conclusion, that glass of wine made me a little poorer in the wallet, but I have never looked back! 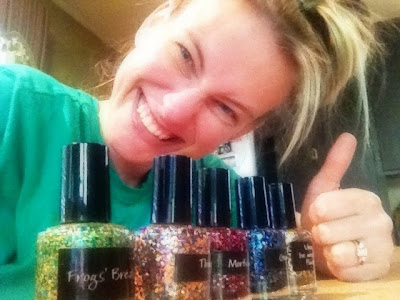 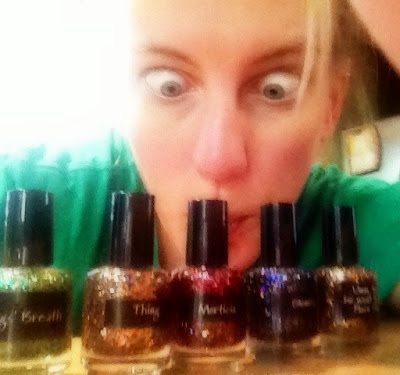 You can check out Lauri's blog
http://thepolishedcrow.blogspot.com/?m=1

Please check out Mishka at
http://acciolacquer.com/