If I could go back in time, and talk to my pre-teen self, I would tell myself to buy all the Revlon Street Wears, and hold on to them forever. The Revlon Street Wear polishes were some of the best polishes out there. A lot of their glittery polishes were so innovative and funky at the time. You can still find some of these on ebay if you're lucky. I notice most of the cooler ones sell on there between $25-$30. That's a lot of money. I've have come to terms with the fact that some of the ones I want the most I will most likely never ever see again or I don't want to pay the hefty price tag for them.

I came across a post by Polished Claws Up! on Revlon Street Wear Jewels, and my heart ached. I want this polish so bad, but I think it's pretty much guaranteed I will never have it. What's the next step? Try to find a dupe or something similar. There are a lot of iridescent glitters out there, but none quite like Jewels. My closest guess was Hard Candy Break Up. Sadly, I never bought that one, and it was long gone from Wal-Mart. I did find it on ebay though for it's regular price. Did it do the trick? 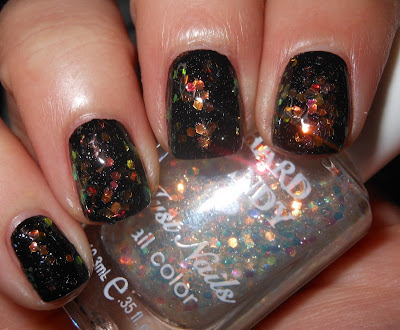 Break Up is a mixture of medium hex translucent iridescent glitters and fine micro glitter.

No dupes. Not even close really. They do have similar elements. The glitter in Break Up is too translucent. The glitter in Jewels is more opaque. Jewels also has more density to it. There are also small glitters in there that are also iridescent, while the small glitters in Break Up are pretty flat. Jewels is just so so so much better. They're different. I'm disappointed. I will never get Jewels, however, I'll move on.

Despite my disappointment that I have not found a dupe, I still really like Hard Candy Break Up. It is a beautiful glitter. It will be a beautiful layering polish over any color I'd imagine. So, don't count it out because of my comparison. I think I need to pick up China Glaze Make A Spectacle. I know it's not a dupe to Jewels either, but I think it has similar opaque glitter/color. That maybe my closest bet.

Posted by Stephanie Merlin at 12:05 PM