Once Upon a Polish: Queen of Hearts

I must thank my friend across the pond for the reminder about the anniversary! I told them about how I was going to have an Alice themed post, and they wondered if it was coincidence or if I had remembered it was the anniversary. It was purely coincidence, but I'm glad I was reminded!

In honor of Alice in Wonderland I have an Alice themed polish for you today made by Once Upon a Polish. 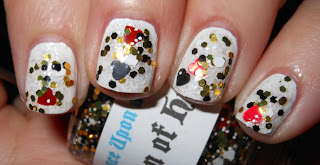 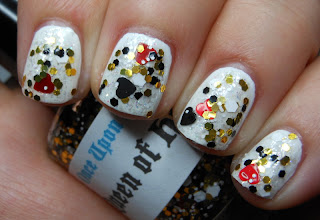 I know that was a mouthful! I can officially say this has been added to my Top 20 of 2012 polish list. This glitter is awesome. I love the colors and the variety of glitters. Once Upon a Polish does an amazing job of capturing the essence of her polish ideas and putting them in a bottle. There is no doubt this is Queen of Hearts! I know Once Upon a Polish is on vacation, but make sure to bookmark her etsy store. I'm sure she'll have more goodies when she gets back.

Do you all have a favorite film version of Alice in Wonderland? Let me know in the comments. My favorite version is one from 1985. I believe they showed it on TV and it was done it two parts (Alice in Wonderland & Alice Through the Looking Glass). It had a bunch of famous stars from back in the day like Sammy Davis Jr., Carol Channing, Ringo Starr, Shelley Winters, and so on. It was filled with songs and was incredibly cheesy, but I love it to this day. I get the songs in my head all the time like this one....

Remember- Jam tomorrow jam yesterday, but never jam today!
If you want to read more on Alice's Day check out their site. If you're in the UK, and near Oxford it's taking place this weekend, so it maybe fun to check it out!
Happy Thursday!

Labels: black, glitter, gold, once upon a polish, red, white