*Be sure to check out my new blog sale!

Is everyone over Hunger Games fever? I think I am. I love Hunger Games, but the hoopla people bring about it makes me wish it were pre-Hunger Games movie time. I don't know, the book is so powerful and meaningful, but these teens salivating over actors and silly stuff kind of diminishes the integrity of it all for me. I'm tired of the Hunger Games references and inside jokes. It's a great book, the film was good too, but keep it at that. I know I'm a Debbie Downer. I just hate it when something I like gets overrun by overly hormonal and dramatic teenagers (says the person who obsessed over NSYNC from ages 11-15 :P). Anyways...back on nail polish. This is one of the China Glaze Hunger Games themed polishes they released. 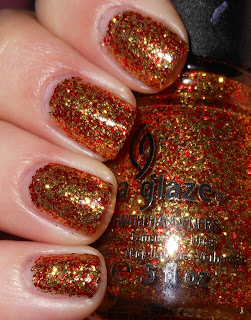 Electrify is a mixture of gold and red glitter in a clear base.

I was able to get full opacity in 3-4 coats. This was a nice surprise! The formula was good too. I really like this polish! I love the mixture of gold and red. I probably wouldn't wear this as a full mani, but I do love it as an accent. I wore this as an accent nail when I saw Hunger Games movie (says the person who doesn't like the over-hyping of Hunger Games). Overall, awesome glitter polish!

I have winners for my 2nd Blog-o-versary giveaway. 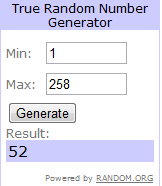 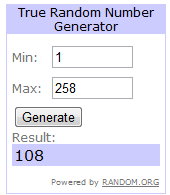 Congrats to Amanda A. and MariJo!!!!