This is the second edition to the Around the World...Somewhat Part 1 post.

It took my boyfriend and I two more trips to the Epcot Food & Wine Festival to be satisfied that we tried everything we wanted. We revisited some of the stands we did before, but tried different things from them. This is an accumulation of both of the days we went.

Also, just reminding you I'm not a food blogger. It's hard for me to describe and pinpoint flavors in spices. So, just expect a lot of this was good or this wasn't so good. I also can't vouch for the authenticity of certain countries' food. Don't blame me if what I got isn't really what that country serves! :P

Australia
Shrimp on the Barbie with Pepper Berry Citrus Glaze 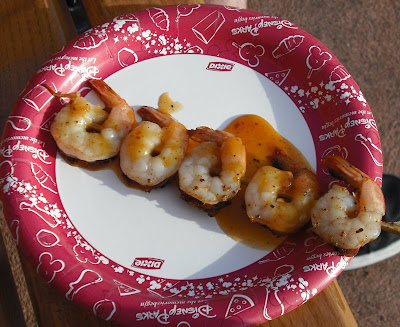 I think the description explains this best. The shrimp was good. The sauce was interesting. This did not taste like anything unique or anything. I've had grilled shrimp a lot. 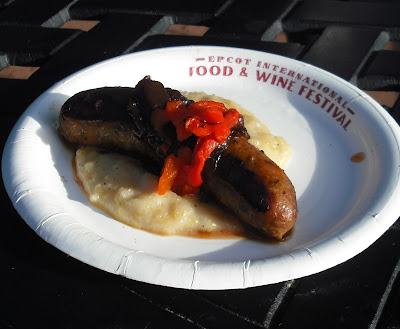 This sausage was spicy! It was almost too spice. It was really flavorful though, and the corn polenta on the bottom was sweet and delicious. The corn polenta was the perfect accompaniment to for the spicy sausage. 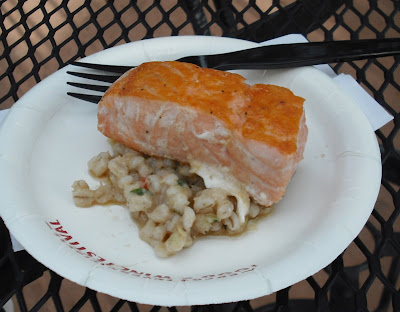 Joseph was really interested in this one. Honestly, cooked salmon is not my favorite fish. I really prefer salmon smoked. This was good though. It wasn't dry, the glaze on it was sweet and so was the barley salad. I'm sure if you're a salmon fan you would of enjoyed this. 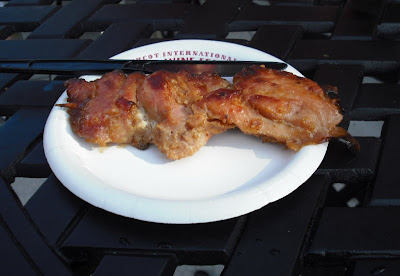 They really gave you a lot here! The meat of the chicken was tender and juicy. My problem with this is there was too much spice on this. It was not spicy or anything, but I felt the spices on this overpowered the chicken.
France
Coq au Vin sur Gratin de Macaroni (Red Wine Braised Chicken, Mushrooms, Pearl Onions, and Macaroni Gratin) 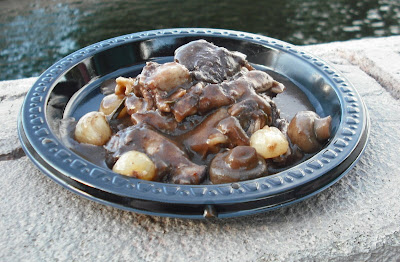 This was divine. I know it doesn't look appetizing on the plate, but it was amazing. The sauce was so rich and complex. The chicken was moist. The macaroni on the bottom was cheesy. Yum! I could of had another plate of this.
Hawaii
Tuna Poke with Seaweed Salad and Lotus Root Chips 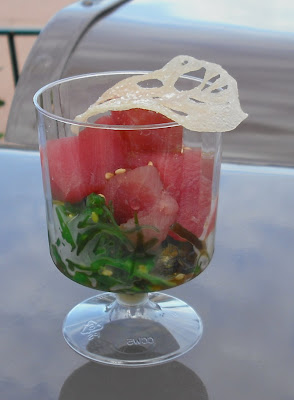 I'm one of those few people on earth who does not care for raw fish or sushi type things. I know everyone is in love with sushi. I just don't get it. It doesn't have an appetizing flavor to me. This had similar sushi taste. I ate some of it. It was very fresh. The seaweed salad was really good. The texture of the seaweed salad was very bizarre. It was like chewing rubber bands. That was something I would have to get used to.
Ireland
Lobster & Scallop Fisherman's Pie 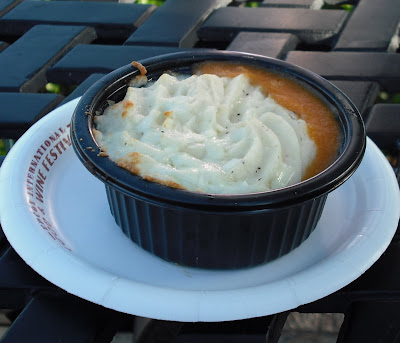 This was rich and creamy. There were full chunks of scallop and lobster in here. Delicious. There isn't much more to say!
Italy
Ravioli di formaggio all'Emiliana (Baked Cheese Ravioli with Creamy Beef Bolognese, Parmesan, and Mozzarella) 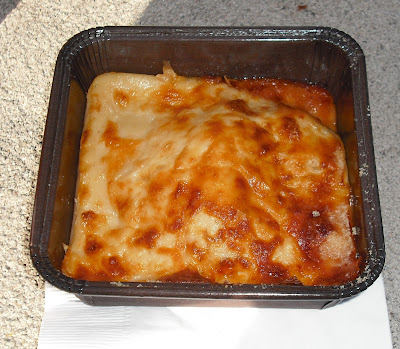 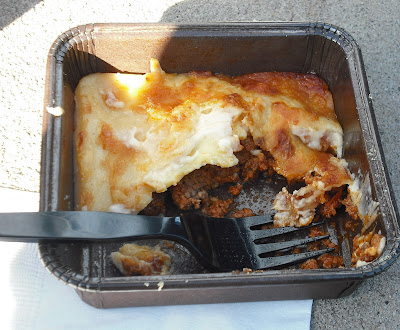 This was a massive portion for it being considered a small plate. It was very rich too. I did not want to eat all of this because I knew I'd be sick. It was just that rich and cheesy! The beef bolognese on the bottom was delicious. I'm so picky about my sauces. The tomato sauces you get here in the jar have ZERO flavor. It makes me want to cry. I love a very flavorful sauce, and this was just that.
Japan
Pork Kakuni 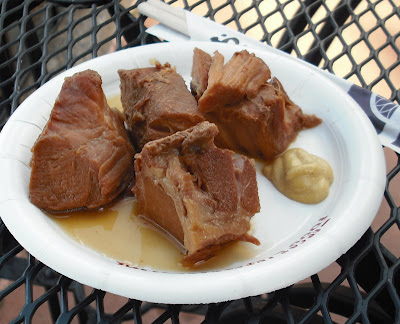 This was a type of braised pork. The flavors on this were great, but this meat was painfully dry. I needed to drink water along with it just to get it down. We couldn't stop eating it because the flavor was good, but it was just so dry. Sad sad. I hope it's not supposed to be like that?
Mexico
Crispy Shrimp Taco (Chipotle Lime Mayo and Cabbage on Flour Tortilla) I loved this. I love all the components of this, the crispy shrimp, the crunchy cabbage, the spice of the sauces, and squeeze of lime. I love how acidity in a dish can really bring out all the other flavors. This was spot on. I could go for whole plate of these!
Poland
Kielbasa and Potato Pierogie with Caramelized Onions and Sour Cream 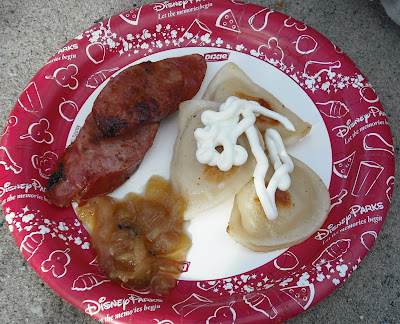 Errrr, not my favorite. The kielbasa was pretty generic, though I don't think I should of expected any different. This was my first time trying pierogies, and these were chewy, soggy, and cold. It was really unappetizing. I'm not sure if that's how they're supposed to be? The caramelized onions were good though. :-/ Blech.
Scandinavia
Taste of Scandinavia (Shrimp Salad, Cured Salmon, and Herring) 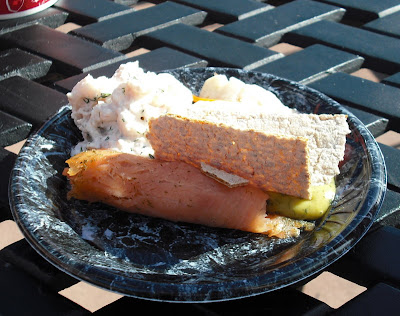 I really loved this. I think it's probably because I grew up eating in a lot delis that had fish salads and smoked fish. I loved the cured salmon with the dill sauce. The shrimp salad was good too, though it probably could of used a little less sauce. The herring well, even though I grew up eating a lot of deli food, pickled herring was never one of my favorites. Joseph liked it though.
South Africa
Seared Filet of Beef with smashed Sweet Potatoes and Braii Sauce 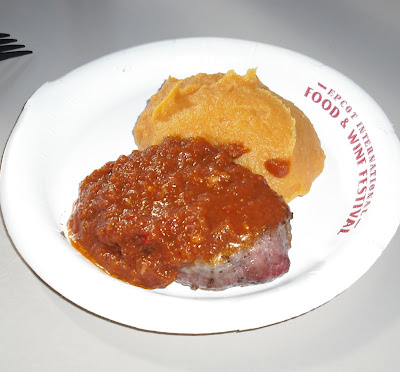 Meat was good and tender. The potatoes were good. The sauce, for me personally was not good, and that's only because it reminded me of flavors in Indian food. Like sushi, I'm one of the few people on earth who does not really like Indian food. I'm sure most people would like it then, and I'm just weird.
South Korea
Lettuce Wrap with Roast Pork and Kimchi Slaw 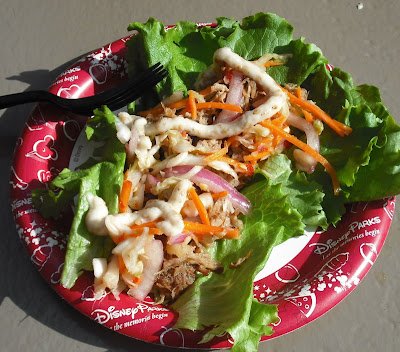 I liked this probably for the same reasons I liked the taco. All of the components in here just worked perfectly together. I loved the sweet pork with the spice of the kimchi slaw, and the crisp lettuce. I'm not entirely sure what the sauce was on top, but I know it had sesame seeds in it. I really enjoy a mix of textures and flavors in food.
My overall favorites:
Australia Lamp Chop
France Coq au Vin
South Korea Boolgogi BBQ Beef
Mexico Crispy Shrimp Taco
Greece Chicken Souvlaki
These trips were filled with some hits and a few misses. Overall, I really enjoyed the Food & Wine festival. I understand a lot of these foods were probably tamed down for the American palette, which is understandable. I had not even heard of or tried a majority of these things before, and it was great to have an opportunity to try something different. Despite my lack of food knowledge, I think this helped me to understand what types of flavors and components I like in food. It was fun and delicious experience!
Happy Tuesday!

Posted by Stephanie Merlin at 11:36 AM