Snow Globe and I are not strangers. We have met before, just not under great circumstances. I purchased Snow Globe when it was first released in Fall 2009 with the other China Glaze specialty glitters. I instantly feel in love with Snow Globe. One day, after a few months of not using Snow Globe, I went to go use it to find it in a horrible state. Poor Snow Globe was completely hardened to the bottom of the bottle. It was not salvageable. No amount of thinner could restore this beauty. I got Snow Globe again with some of the other China Glaze holiday polishes, but I'm a bit hesitant that this one will meet the same fate. 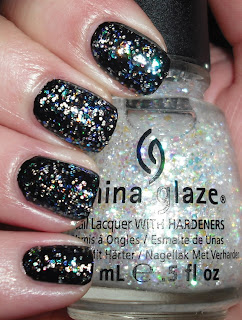 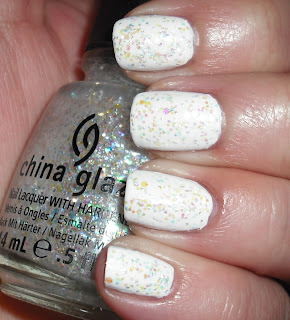 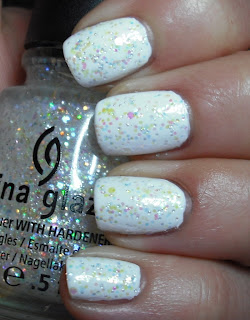 Snow Globe is a mix of large and small white iridescent glitter.

I love the mix of colors you get in this glitter. It is very fairy, unicorn, Care Bear, My Little Pony, and Barbie-esque glitter. I'm sure do not not to further explain this. I hope you know what I mean. The formula in this is a goopysaurus. I instantly put a few drops of in thinner in this. One, to thin it out. Two, because I fear it will meet the same fate as my previous Snow Globe. Overall, this is definitely a pretty glitter. It just might need some extra care.

Posted by Stephanie Merlin at 11:30 AM