When I first heard about L'Oreal's London Fall collection I knew I had to find it. Anything relating to London/England/British/UK sparks my interest. When I saw the collection in person I was a bit disappointed. They had cute enticing names, but a lot of the colors were not new to me. I ended up passing on all of them except one Brit Invasion. 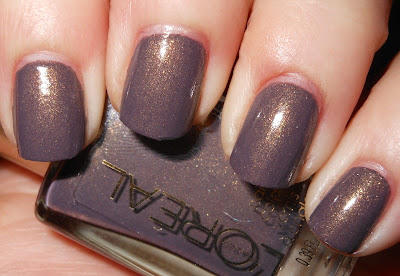 Brit Invasion is a taupe (that leans towards purple) with a golden shimmer.

I really like this color on its own, but maybe not so much on me. I have issues with taupes, they don't tend to look great on my skin tone. This one is a little more forgiving as it leans towards purple versus browns unlike other taupes I've tried. That being said, the formula and brush on this polish were not my favorite. I'm not sure if it's the brush that's the problem or the formula, maybe it's both!  I've had this issue with other L'Oreal polishes too. I don't know how to describe it other than the brush seems to have way too many bristles and it soaks it up too much polish. It makes the polish apply dry and streaky. I'm sure that made no sense. I'm sure a not great brush and formula would of sufficed, but I had to try to explain! Nice color, not so nice everything else sadly.