"Do you remember the 21st night of September?, love was changing the mind of pretenders, while chasing the clouds away....Ba de yaaaa say do remember Ba de yaaaa dancing in September Ba de yaaa never was a cloudy day" --That  Earth, Wind, & Fire song has been in my head since the beginning of September, but since it's the 21st it makes more sense to sing it now!

I think blue has been my color of the year. I noticed while going through my folder of swatches a huge percentage of them are blues. If  you did not know, when I first started blogging I avoided blues. I actually thought blues did not look good me. It's all about finding the right blues! It turned out that blue has become probably my favorite color of nail polish. Times have changed. I was really curious about the American Apparel Sheer polishes when I first heard about them, so when I spotted them I picked up this pretty blue! 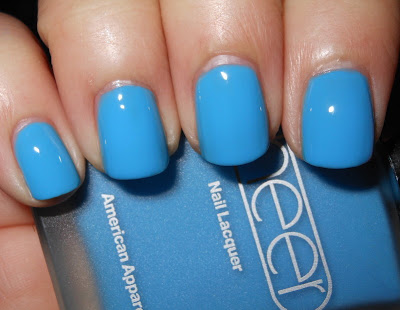 I used 3 coats here, and I'm calling this a jelly. While, it is sheerer when applied with one coat, it's not my idea of a sheer. When I think of sheers I think of those pinky-nudes that take 5 coats to build and are a pain in the acetone to get opaque. This has more coverage than a sheer, and builds up way easier. In Steph's world this a jelly. This was easy to apply and built up so nicely. I love the color. I don't have any complaints. I think this would great to do jelly sandwiches too if you use less coats.