I remember seeing the Deborah Lippmann preview picture of her upcoming Spring/Summer 2012 polishes a few months ago. One of those polishes was a deep blue with what looked like copper flakies. It actually reminded me a lot of my dream polish idea I sent into RBL last year. I knew I needed it that instant, so I waiting patiently for that color to be released. Thankfully, it was released last week on Deborah Lippmann's website (I no longer see it on there today. I'm guessing they sold out?), and I snagged one.
Ray of Light 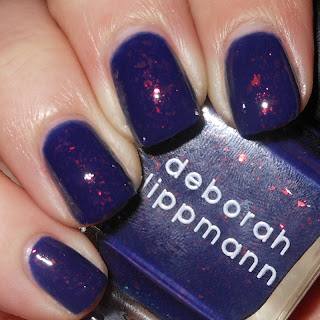 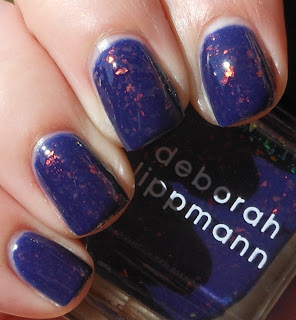 Ray of Light is a deep indigo jelly with pinky-copper flakies.
When I got the bottle, in certain angles the flakies were iridescent that flashed yellow/green, however on the nail they did not. They just looked pinky-copper. This is a beautiful polish. It is really unique. I wish more polish companies would start pairing cool toned colors with copper and gold glitters, shimmers, and flakies.
I will say I'm tad bit disappointed. In some of the bottle shots the flakies looked more like a straight up copper than this copper-pink. This is just me being picky though! I've wanted a mainstream color like this for so long! The formula also was problematic. I found it too thick. I added some thinner to it, but at $18, a problematic formula is not what I expect. Outside of that, I think this color really is a winner.
I'm assuming this will be at Nordstroms soon and restocked on the Deborah Lippmann website...so keep an eye out! I have feeling this will be a popular color too. Don't take my word for it, but I wouldn't be surprised if we start seeing cheaper dupes come fall...just a thought!
Happy Wednesday!