Today, for Throwback Thursday, I have the oldest polish in my collection to show you. I'm not sure if it's the oldest in age, but it's the oldest as far the polish I've had the longest. I bought this sometime in high school I imagine, and somehow it managed to find it's way from Dallas, TX (where I grew up) to with me now in Orlando,FL.I liked nail polish, and maybe had 5-8 bottles in high school, but my obsession didn't start until 2008, so I'm surprised I hung on to this one so long!

I actually know why I bought this color. My high school colors were red and blue. I was a flute player in marching band in high school. In marching band you wear uniforms that include gloves. Flute players were allowed to cut the fingers off their gloves because we needed to be able to cover up holes on the keys of the flute that a glove could obstruct. We were instructed that we could NOT wear nail polish because it could be distracting on the field and not look uniform with the rest of the band.

I internally said screw that, and wore nail polish anyways. I was such a rebel, thankfully, no one noticed or said anything. I had to have a nail polish that matched my school colors though. This was the early 00's probably 2001ish(?), and around when Sally Hansen had this chrome line that was so amazing in nail polish. I picked up a red one and wore this to almost every football game I marched at! 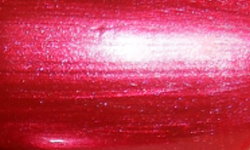 Color: I think this is an atrocious color now. This is so frosty and full of brushstokes. This is something I would never wear now and if it weren't for the nostalgia, I'd just trash it! It is a nice shade of a red, but this finish of nail polish is ugly and dated for 2015.

Formula: Shockingly this formula didn't need any reviving. It was easy to use, but you get tons of brushstrokes. I didn't wear this as real mani, but from what I remembered in the past was this was chip central.

Price: Shockingly too, you can still purchase this if you want it. There are many e-tailers who have it if you search it on Google in the $3-$4 range.

Overall: Burmese Ruby will always be in my collection for good ol' times sake. I do love it for sentimental reasons,  but it's no longer a color I find is cool or nice.  I did have the prettiest nails of the J.J. Pearce Mighty Mustang Band flute section even if I wasn't supposed to!

My Rating: I think it would be unfair to rate this. I would rate it poorly by today's standards, but I'd feel like it would be mean. I had some good times with Burmese Ruby!