Today's guest post is brought to you by Alicia from Adventures of a Brand Stinking New Mom. Alicia chose to share with us a great story about how she received her bottle of HARE Asteroid Turf!

A special HARE came to see me for Easter!

Sometimes a small gesture can make a huge impact, even in the nail polish community. I am currently obsessed with nail polish, so much so, that even the Easter Bunny knew it! So what are the odds that that big ole hare dropped off some HARE polish while leaving the kids some goodies!

Hare polish is handmade by a brilliant lady named Nikole. Nikole is one of the nicest people around. After I told her about how desperate I was to get my hands on Asteroid Turf but could not pay ebay prices, she told me she would be restocking a few bottles at her shop. She told me to keep my eyes and ears open to announcements on facebook.

The stalking began!!! Asteroid Turf turned into my unicorn, my great white whale, my totally fat free cheesecake! A myth that could actually be in my reach?! Say it isn’t so!! Too good to be true!

Of course the restock happened while I was working! Well, actually while I was sleeping, because I work nightshift at a local hospital lab. I woke up in a haze and grabbed my phone, checked HARE etsy store, then HARE facebook page and saw I missed Asteroid Turf by just minutes!

I honestly thought I was going to cry! I wrote Nikole and told her I appreciated her letting me know that a very limited amount Asteroid Turf was being restocked, but I was too late. I overslept. The early bird catches the worm, and the late bird just sees the poop the early bird left behind after finishing his meal.

Nikole was so sweet. She told me that she had one bottle set aside incase I contacted her saying I missed it. At that moment, I really did begin to cry!

That touched me to the core. I had been through so much recently trying to recover from a major car accident. I was blindsided by another vehicle, rolled over 3 times, landing upside down, and had to climb my way out of an inverted car. Everyone who came to my aid thought I was dead. They were shocked to see me sitting next to my car relatively okay.

I walked away with minor bumps, cuts and bruises, but my mind took the biggest hit. My emotions were all over the place, worse than when I was pregnant! It has taken many tears, panic attacks, counseling, and pretty nail polishes to get my mind at a somewhat normal state.

So, when Nikole did this out of the kindness of her heart for me, a total stranger, it really touched my soul. It wasn’t so much about the polish itself anymore. It was the fact that someone I would never meet face to face in my lifetime did something really nice for me. For crazy ole me! I will forever be thankful to Nikole for her small gesture that made such a big impact. 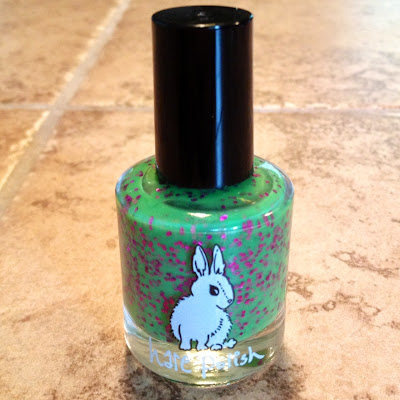 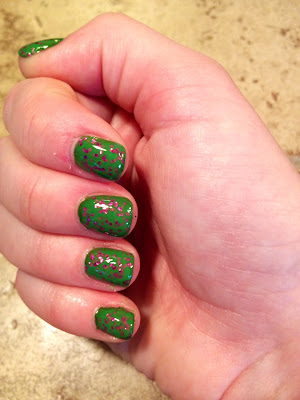 Thank you Alicia! That is a wonderful story, and it reminds me of how wonderful many people are in the nail polish community. Be sure to follow Alicia on tumblr, Twitter, and Instagram!